Volgograd anomaly of the space-time continuum of the Earth 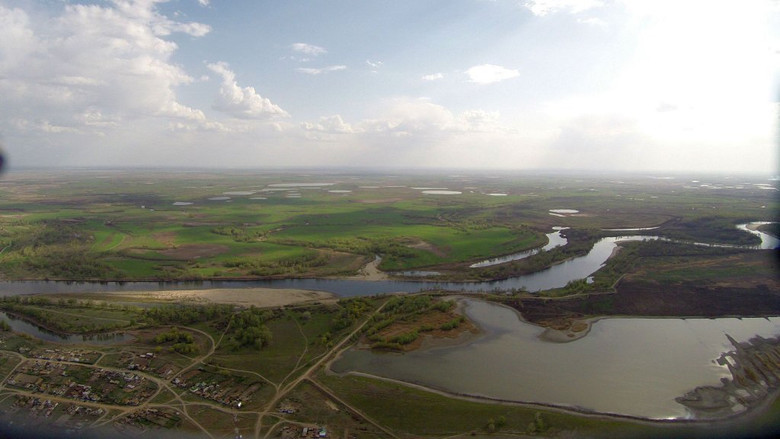 This anomalous place is in the Volgo-Akhtuba floodplain in the Volgograd region, in the floodplain places near the village of Karsevitoye. Its special properties are manifested during the powerful thunderstorms, not infrequent in these parts.

So far there have been few witnesses of extraordinary phenomena, but what is described by them can not be squeezed into the framework of a sound explanation. It seems that here is an anomaly of the space-time continuum of the Earth. In other words, the transition of a given place from one point (time) of time to another, located at a considerable “distance” from the first, occurs abruptly, that is, bypassing the intermediate time regions.

Let us illustrate this with the example of the speed of thunderstorm clouds, described by eyewitnesses. From the science of mechanics it is known that the speed is a quotient from the division of the distance traveled during its passage. If the distance is finite, and the time is close to zero, then the speed is very high.

The jump in time, which was mentioned above, is “almost zero time”. Consequently, objects (physical) trapped in a temporary anomalous zone can move at a very high speed, uncharacteristic for their movement under normal conditions.

It was this phenomenon that Volgograd electronics engineer Vladimir Guschin observed in 2000 in the Carsevit loan. For greater persuasiveness, let us partially quote his story about his impressions:

“To find out if the lightning is far from us, I usually think. Here’s a new flash that dazzles the tent’s canopy with its dazzling light, and I begin to count how many seconds it passes before the thunder hits. It is known that the velocity of sound is 300 m / s. After another flash before the blow, 13 seconds passed.

Well, I think it’s still far: somewhere at a distance of 4 km. But the flashes of lightnings are increasing, and the “bombardment” is intensifying. I could not resist and left the tent. Lightning struck in front, and from the side, and there, and here. Flashes and zigzag, and straight as poles. Only I returned to the tent and lay down, as the rumble was heard – only 2 seconds after the outbreak.

That is, it hit somewhere very close, not further 500-600 m. I prepared to take it further. One more piercing flash, and in my head it flashed: “One … Now there will be a blow.”

It was the 12th hour of the night from Saturday to Sunday.

And then something fantastic happened – an instant “leap” into the future through a “temporary distance” in a few hours:

“Suddenly it was … morning. Instantly! As if we did not sleep at all. Everything is shining all around, the sun is shining. And it’s not early morning, but, probably, already the 9th hour of the next Sunday. The sun is already high, warm, the birds sing. It smells like rain. Everyone in the tent immediately started.

I begin to recall the experience I just experienced and ask: “Friends, do you remember how we fell asleep?”. But nobody remembers this. Well remember another: all of us – 5 people with my daughter – lay, covered in blankets, driving fear with conversations.

Everyone remembers how I felt and, it turns out, managed to say aloud aloud: “Alone.” And that’s all. Without any transition, the morning of the next day arose. And that is characteristic: no one in my memory left the dream itself. Imagine: you are now sitting, closing your eyes, and then opened – and the next day …

In the situation that we had, no one could sleep. And so that all five turn off, here, I’m sorry, you need some powerful external influence. Moreover, when I left the tent, I noticed an interesting phenomenon: the knots of plants, where the stems shoot the arrows, were dusted with some ash, like coal dust. As if something had gone wrong. This phenomenon was noted approximately in a radius of 500 m. ”

This story V. Gushchin told his friend, fisherman Anatoly Mikhailovsky, who, under the impression of what he heard, decided to fish in the place indicated by Gushchin. There he was also on Saturday night and, as an order, a monstrous storm broke out with dazzling gigantic lightning:

“The posts approached the left bank and the copse where my lone tent stood. The head pierced the thought: “Well, now.” And after that, without any transition, I discovered suddenly that I was standing by the tent, the sun was hot, and in the nearest forest lake the fish were flapping their tail with water …

After a successful fishing, a local resident clucked his tongue: “The place is special. Nowhere bites. And after a thunderstorm, a real soda begins. Well, with the Sunday you catch. ”

He said: “With the Sunday.” So time again played in these places an unsolved joke. And the dragging tail of the pike was shaken off from the copiously growing mother-and-stepmother’s powder of shiny ash. “