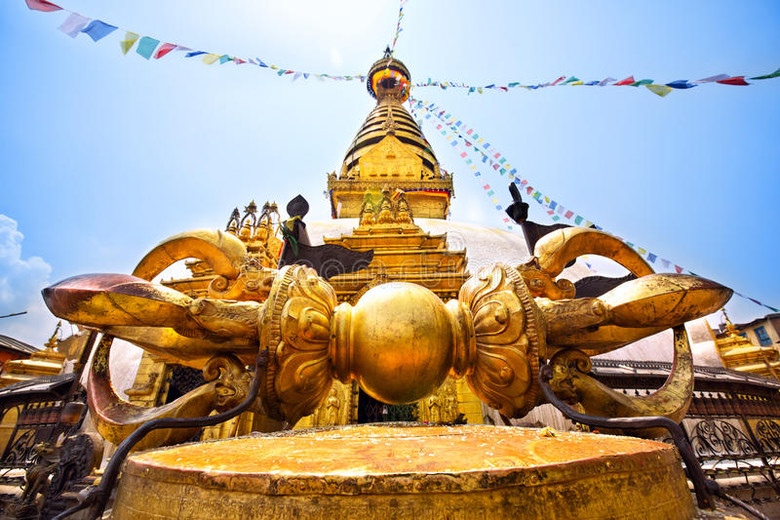 Kathmandu is the capital of Nepal. The city itself and its two ancient complexes of royal palaces – Patan and Baktapur – are located in a spacious intermountain valley. According to geologists, about 200 thousand years ago, on the site of today’s Kathmandu valley, the waters of a huge lake splashed, and small pieces of land that rose above the water looked like miserable islands.

Surprisingly, the oldest local legends tell about this. They say: in the old days, only the Swayambhunath hill towered over the waters that covered the entire valley here. Once upon a time, a great-Buddha appeared on this great hill, assuming the form of a “self-igniting fire.”

Such an interpretation does not seem very convincing to ufologists, especially if you look at the Swayambhunath hill more closely. Perhaps the “self-igniting fire” has already revealed its secret in the image of this stupa?

Climbing the Swayambhunath hill, you begin to understand the authenticity of the ancient legend, which claims that only this place once towered over the waters of the lake. In the whole valley, as far as the eye can see, there is not a single hill.

The question of who could have composed this legend 200 thousand years ago remains open (purely theoretically, it is possible to assume that we are dealing with eyewitness accounts, since the origins of the human race date back to 200 thousand years from us. how oral tradition could have survived over such a huge period of time remains an insoluble mystery).

Having overcome a staircase of three hundred steps, you find yourself in front of a stupa, which appears before your eyes in all its splendor, directed up into the sky. If we connect these already recognizable contours (the stupa is very similar to a space rocket) with the evidence of the legend that a “self-igniting fire” once descended from heaven to this hill, then the interpretation of these facts in the spirit of the paleocontact hypothesis takes on quite real outlines. 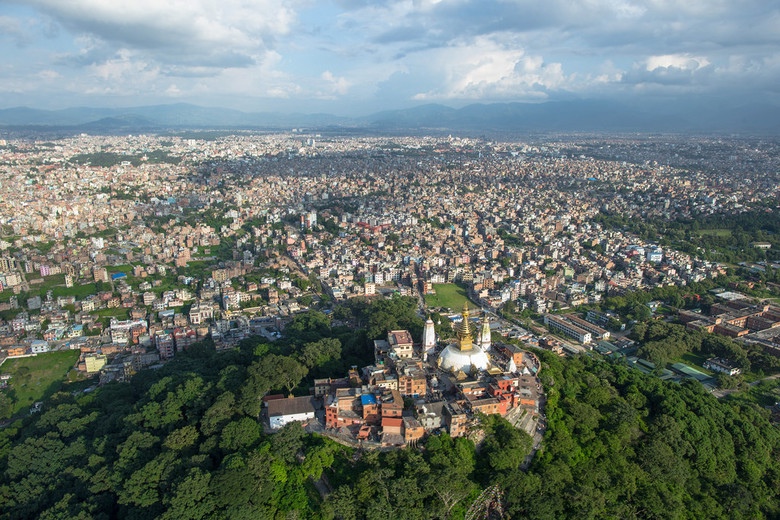 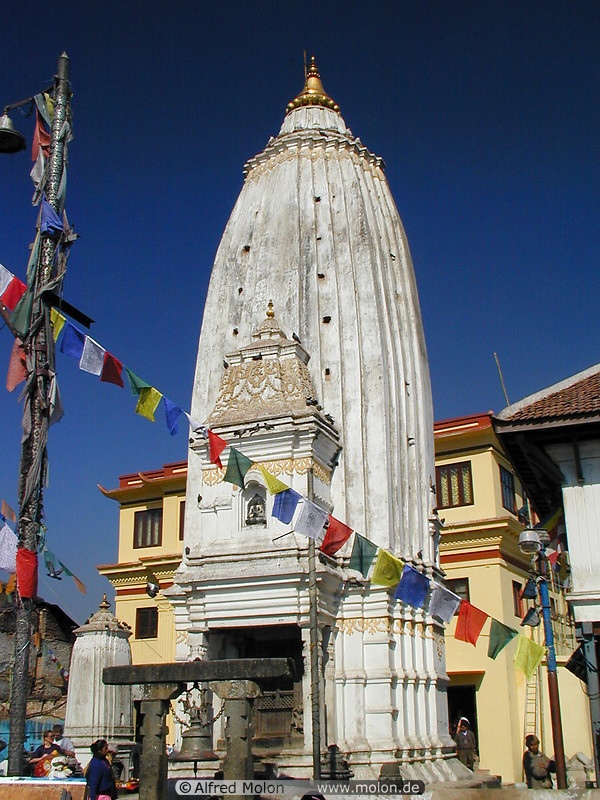 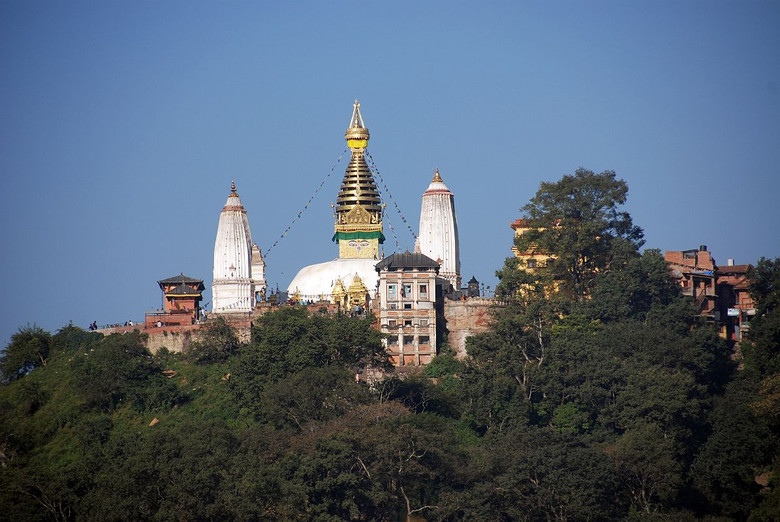 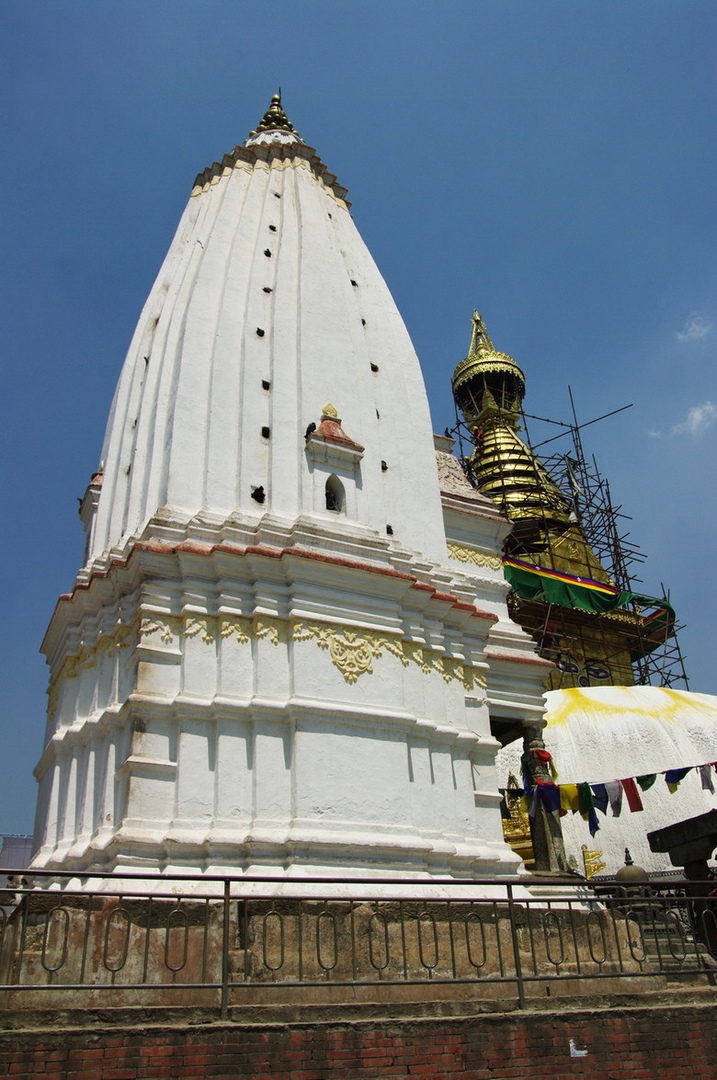 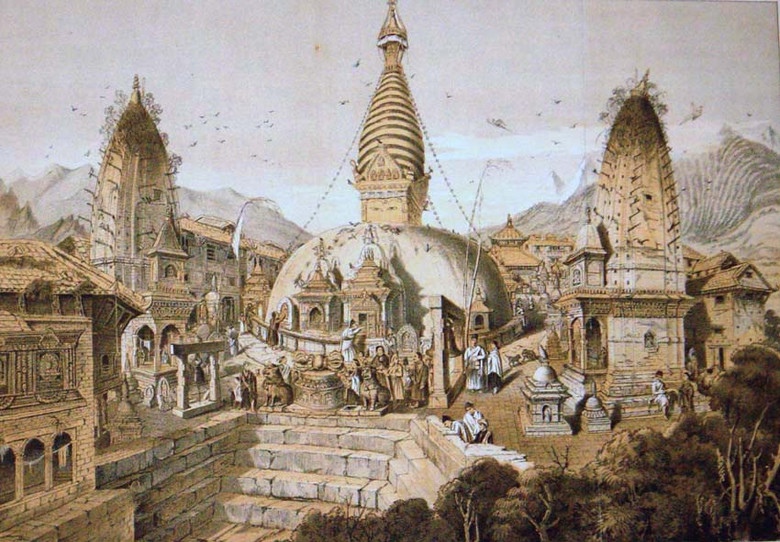 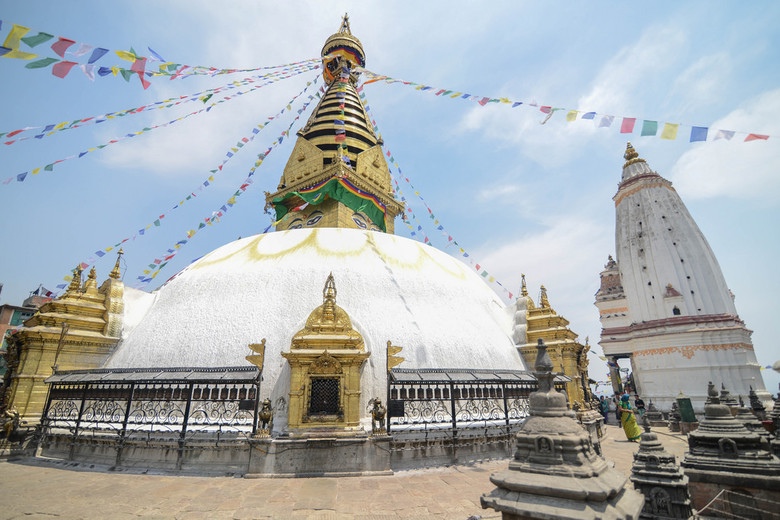 Perhaps Swayambhunath in some immemorial past served as a landing site for “gods” – aliens?

When visiting this complex, the strange circumstance immediately strikes the eye that this place enjoys a special veneration both among Buddhists and Hindus. In Hinduism, the stupa is considered the visible embodiment of pralingam, which arose from a beginningless essence and is depicted in the form of an egg. (Lingam is a phallic sign common in many cultures and considered a symbol of fertility and the creative forces of nature).

This version, as well as the interpretation of the lingam as an ancient pillar of fire, serve as additional arguments in favor of our hypothesis. The conclusions of observations of the stupa on the Swayambunath hill suggest the same idea.

Smaller structures of the temple complex are grouped around the main stupa. It is not necessary to have a rich imagination to recognize in them the reproduction of the external forms of high-tech systems (for example, space shuttles such as the “Space Shuttle”). And in the center of the whole ensemble, as if confirming this hypothesis, there is the image of that very Buddha, who, like a “self-igniting fire”, is directed into the sky.

And next to the central stupa is a rather recognizable object called a vajra. It was considered a formidable weapon of the gods. Vajra is a cult symbol, like a cross for Christians or a crescent for Muslims. Until now, the vajra is used in various rituals, and the Buddha is often depicted with it in his hands.