Appearance of UFOs in the sky over England on August 18, 1783

Late on the evening of 18 August 1783, a group of all sorts of people, including the Italian naturalist Tiberius Cavallo, the painters brothers Thomas and Paul Sandby, and a couple of ladies who accompanied them to a reception at Windsor Castle went out for a breath of fresh night air on the North Terrace of the castle.

Suddenly the sky lit up in a flash, from the north to London high in the sky approached a huge white balloon, from which occasionally separated smaller balls, the color of which varied from pink to purple. Suddenly a spherical cloud began to form around the white ball.

Amazed by what they saw, the spectators froze and watched the unseen celestial phenomenon, as suddenly an air wave reached them and a terrible roar deafened them.

Now such a rumble is accompanied by an airplane overcoming the sound barrier, but then, as we understand it, this sound was unfamiliar to absolutely everyone on the planet earth.

After 15 minutes, the object disappeared from view from the observers on the North Terrace of Windsor Castle, moving away to the south, accompanied by a multitude of satellites.

The flight of the bolide was watched not only by guests at the reception at the royal castle, but by many people of all social positions and occupations throughout the country, beginning with sailors in the North Sea, where the object entered the atmosphere of the earth, among them were also scientists, inventors, naturalists who left numerous memories.

Paul Sandby, one of King’s guests that evening, drew a watercolor depicting the flight of the “celestial balloon” and its satellites over London. An engraving based on this watercolor now graces the University Museum in Glasgow.

This event became a major topic of discussion at the Royal (Learned) Society for many months, and a major distraction from the debate over Britain’s shameful Peace of Paris in which 13 of its colonies in North America gained independence and seized from the British the land between the Appalachian Mountains and the Mississippi River.

Here is how eyewitnesses described what happened:

“An oblong cloud moving more or less parallel to the horizon. A luminous object could be seen under this cloud, which soon became spherical, brightly lit, and stopped.

This strange sphere seemed pale blue in color at first, but then its brightness increased, and soon it was heading east again. Then the object changed direction and moved parallel to the horizon before disappearing to the southeast; the light it emitted was stunning; it illuminated everything on earth for us.”

Modern scientists consider what happened then to be a meteorite fall, and this is not surprising, since official science is always looking for a way to explain what people question. 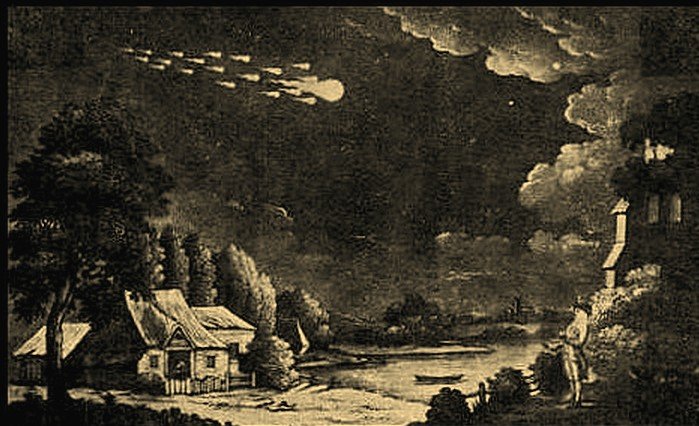 However, even a person far from science is clear that meteorites do not behave like that. A meteorite is just a stone, which on its way meets the Earth, enters the dense layers of the Earth’s atmosphere and either explodes, or falls, or passes tangentially and flies away into outer space.

If you read the descriptions of the events that left us people who observed this event, its behavior does not correspond to the “fall of a meteorite”.

Tiberius Cavallo wrote: “This celestial balloon flew over the open waters of the North Sea and passed along the entire eastern coast of northern Scotland and England.

It is also reported that witnesses from the Shetland Islands to Brussels saw the glowing bright spherical object turn into the shape of an egg and change shape repeatedly.