“Go earthly man and tell everyone that you are interfering with our planet and we will have to destroy you.” 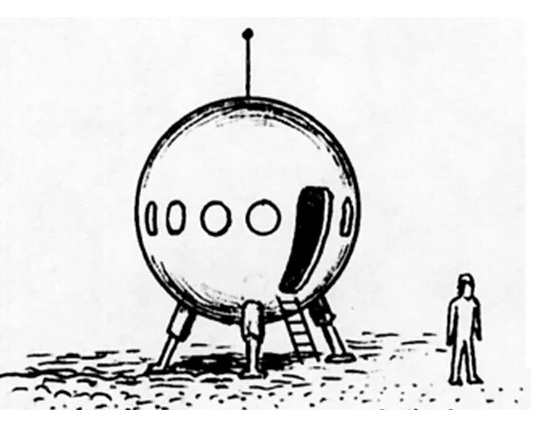 Leonid Ivanovich Glushko, who at the time of the interview turned 85, is an honored person, a veteran of the Great Patriotic War, was a history teacher, worked for 30 years as a school director and his testimony of contact with representatives of an extraterrestrial race is trustworthy.

Having retired, Glushko bought a small house in the Krasnodar Territory in Novokubanka, where he led a measured rural life with his wife. They kept goats and Leonid went to mow hay for them, in a vacant lot outside the village.

Once, having gone for hay, he saw a brightly luminous object approaching from the west in the sky. He got scared and hid in the bushes, squatting down, watching the approaching UFO.

The UFO landed right in the meadow where he was going to mow the grass and suddenly, suddenly, someone’s strong hand grabbed him by the collar of his shirt from behind and lifted him into the air. The unknown man carried him holding the shiforot to the ship itself.

Leonid saw three supporting “paws” on which stood an oval-round shiny flying machine. Then a door opened in the board and a staircase went down.

They brought Leonid to the door where he saw two more “people” sitting inside the apparatus. The third one who brought him there was also inside.

Leonid realized that he would now be taken away and asked the chief, – but what about my goats?

The chief answered with displeasure, – nothing will happen to your goats!

Then Leonid Ivanovich felt that the device took off and they flew for a long time, only where he did not see. The chief, who dragged him into the ship by the shiforot, talked to him a lot, explained something, got angry, but only the last words remained in the old man’s memory:

We landed, the door opened and the chief said, – Go earthly man and tell everyone that you are interfering with our planet and we will be forced to destroy your planet.

Leonidas went downstairs, the chief slammed the door, a noise was heard, the supporting “paws” were pulled inward and a shiny elongated oval ball soared into the air and quickly flew away.

Leonid Ivanovich says that when he got out of the ship on the stairs went downstairs, there was a feeling that he did not understand not just where he was, but who he was in general. Apparently, his memories of the details of the flight and what happened there were erased to him. The only thing that he clearly remembered was the words of the chief, who told him them, already when he was standing below on the ground by the ship.

Leonid Ivanovich took his bicycle, a scythe and a bag that he took with him for grass and could hardly get home. he felt very bad, he had to call an ambulance and he left that meeting for a very long time.

For a month and a half he lay in bed and did not tell anyone all this time what caused his illness.

What did the ship look like, how big was it?

An oval or round, rather an elongated oval, three support legs, a shiny color, a silver hue, and inside three strangers were sitting behind a round “wheel”, which apparently controlled the ship. In the side of the door, a ladder and stairs opened and went down. The dimensions of the ship are approximately 5 or 6 meters in diameter. Later Leonid went to the landing site and there were still visible prints from the support “paws”. Accordingly, the weight of the ship was significant.

What were the sensations, did you have a headache?

No, nothing like that happened, he was more worried about his goats, worried.

Why did they call an ambulance?

There was nothing, no temperature, no heart problems. According to the old man, he was simply worried and could not understand and believe what had happened. to tell even his loved ones he was afraid that they would think that he was crazy. I told it much later, two months later. The only thing that drew attention to his wife, her husband started having problems with memory, began to often forget something, but she attributes it to “old age”.

What language did they speak to him?

In Russian. It wasn’t telepathy, they just spoke like ordinary people. one of the three was talking – the main one, the other two were silent all the time. All three were men.

How tall was the main one?

Strong, carrying the old man by the collar into the ship like a kitten. The growth of Leonid Ivanovich is 1 meter 70 centimeters, and the main one was one and a half times taller than him. A swarthy, almost black face, a large physique, muscular, dressed in a suit that fits him like a fish skin.

Interpretation of the message of aliens

According to Leonid’s recollections, he says this phrase with some discrepancies twice during the interview, and the essence of the phrases changes their main message.

1. “Go earthly man and tell everyone that you are interfering with our planet and we will be forced to destroy your planet.”

2. “Go earthly man and tell everyone that you are interfering with our planet and we will be forced to destroy you.”

In the first phrase, there is a message from civilization from another planet, to the inhabitants of planet Earth in which there is a threat to destroy the Earth.

In the second, a completely different meaning – this is a message from non-aliens. and the real owners of the planet Earth in which they say that it is not the planet that hinders them, but we – people, hinder their planet (Earth) and they will be forced to destroy people.

With very little difference in words, this message is completely different. It is a pity that Leonid Ivanovich does not remember what he was told to convey to people word for word.

A very small difference changes the whole meaning of the message. Leonid Ivanovich says option 2 for the first time, and then at the end he changes it to “destroy the Earth” and I think he simply interpreted the words spoken to him in a more familiar sense in 1 version. He simply associated the concept of “You” with the concept of “Earth”, but only in our concept these words are inextricably linked “Earth-People”, since we are sure that we are its owners, but this may not be so at all ..

Apparently, the main thing said to him from that ship was exactly this:

“Go earthly man and tell everyone that you are interfering with our planet and we will have to destroy you.”