If the world community recognized the existence of aliens, how would that change human culture and society? 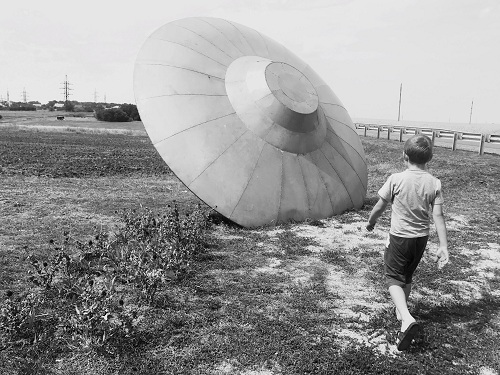 The most curious story in the news right now is the admission at the highest levels of the United States government that the military services have collected visual images, data and evidence recording flying objects that they cannot explain; that they are seriously investigating these phenomena; and that they will report at least some of their findings to the public in the coming months.

At times it’s like the beginning of a movie, with everyone minding their own business, even when there’s an earthquake on muffled TV in the background.

Over the past few years, The New York Times has published a number of pieces confirming the existence of a military program called Advanced Aerospace Threat Identification and videos of trained pilots admiring unidentified aircraft that clearly defy the limits of known technology.

On April 30, The New Yorker published a revealing article by Gideon Lewis-Kraus that traces the growing interest in UFOs on the part of Congress, the military and the media. Harry Reid, former Senate Majority Leader from Nevada, is emerging as a key figure. In the middle of his decade-long career in government, he pushed for funding for these investigations, and after he retired, he tirelessly insisted that the military had information about UFOs that the public deserved to know. He told Lewis-Kraus that he believed Lockheed Martin had debris from the crashed plane, but when he asked the Pentagon to show it, he was refused. “I tried to get, as I recall, secret permission from the Pentagon so I could look at that wreckage,” he said. “They didn’t give that permission.”

The request, included in the Intelligence Authorization Act of 2021, gave the government 180 days to collect and analyze the collected data and publish a report on the findings. In a Fox News broadcast, John Ratcliffe, the former director of national intelligence, was given the opportunity to downplay the report, the preparation of which began during his tenure, but he declined.

“When we talk about UFO sightings,” he said, “we’re talking about objects seen by Navy or Air Force pilots or captured by satellite imagery that, frankly, perform actions that are difficult to explain, movements that are difficult to reproduce, for which we don’t have the technology, or move at speeds in excess of the sound barrier without a sonic boom. It’s also not just eyewitness accounts from civilian observers. “We usually have some sensors that pick up these things,” he said.

Perhaps Ratcliffe, a former member of Congress whose only job in intelligence came at the end of the Trump administration, is just advertising his work. But that doesn’t explain why former CIA director John Brennan said in an interview with economist Tyler Cowan that “some of the phenomena we’re seeing (UFOs) remain unexplained and may, in fact, be some phenomenon that is the result of something we don’t yet understand, and that may involve some type of activity that some might say represents another life form.”

Of course, none of this is proof of extraterrestrial visitation. And I’m not just offering a formal disclaimer to cover up my firm belief in extraterrestrials. I really don’t know what’s behind these videos and reports, and I like that. In this case, it’s my bias: I enjoy the vastness of mystery. The evidence that intelligent extraterrestrial life exists, and has been here, will turn humanity’s view of ourselves and our place in the cosmos upside down. Even if you think all talk of aliens is ridiculous, it’s fun to let reason ponder the implications of that.

The way I’ve framed the thought experiment in recent conversations is this: Imagine, tomorrow, an alien craft crashed down in Oregon. There are no life-forms in it. It’s effectively a drone. But it’s undeniably extraterrestrial in origin. So we are faced with the knowledge that we’re not alone, that we are perhaps being watched, and we have no way to make contact. How does that change human culture and society?

One immediate effect, I suspect, would be a collapse in public trust. Decades of U.F.O. reports and conspiracies would take on a different cast. Governments would be seen as having withheld a profound truth from the public, whether or not they actually did. We already live in an age of conspiracy theories. Now the guardrails would truly shatter, because if U.F.O.s were real, despite decades of dismissals, who would remain trusted to say anything else was false? Certainly not the academics who’d laughed them off as nonsense, or the governments who would now be seen as liars.

“I’ve always resisted the conspiracy narrative around U.F.O.s,” Alexander Wendt, a professor of international security at Ohio State University who has written about U.F.O.s, told me. “I assume the governments have no clue what any of this is and they’re covering up their ignorance, if anything. That’s why you have all the secrecy, but people may think they were being lied to all along.”

The question, then, would be who could impose meaning on such an event. “Instead of a land grab, it would be a narrative grab,” Diana Pasulka, author of “American Cosmic: U.F.O.s, Religion, Technology,” told me. There would be enormous power — and money — in shaping the story humanity told itself. If we were to believe that the contact was threatening, military budgets would swell all over the world. A more pacific interpretation might orient humanity toward space travel or at least interstellar communication. Pasulka says she believes this narrative grab is happening even now, with the military establishment positioning itself as the arbiter of information over any U.F.O. events.

One lesson of the pandemic is that humanity’s desire for normalcy is an underrated force, and there is no single mistake as common to political analysis as the constant belief that this or that event will finally change everything. If so many can deny or downplay a disease that’s killed millions, dismissing some unusual debris would be trivial. “An awful lot of people would basically shrug and it’d be in the news for three days,” Adrian Tchaikovsky, the science fiction writer, told me. “You can’t just say, ‘Still no understanding of alien thing!’ every day. An awful lot of people would be very keen on continuing with their lives and routines no matter what.”

There is a thick literature on how evidence of alien life would shake the world’s religions, but I think Brother Guy Consolmagno, director of the Vatican Observatory, is quite likely right when he suggests that many people would simply say, “of course.” The materialist worldview that positions humanity as an island of intelligence in a potentially empty cosmos — my worldview, in other words — is the aberration. Most people believe, and have always believed, that we share both the Earth and the cosmos with other beings — gods, spirits, angels, ghosts, ancestors. The norm throughout human history has been a crowded universe where other intelligences are interested in our comings and goings, and even shape them. The whole of human civilization is testament to the fact that we can believe we are not alone and still obsess over earthly concerns.

This has even been true with aliens. The science fiction writer Kim Stanley Robinson reminded me that in the early 1900s it was widely but mistakenly believed that we had visual evidence of canals on Mars. “The scientific community seemed to have validated that finding, even though it was mainly Percival Lowell, but it’s hard to recapture now how general the assumption was,” he wrote in an email. “There being no chance of passage across space, it was assumed to be a philosophical point only, of interest but not world-changing for anyone.”

What might be more world-changing is the way nation-states fall to fighting over the debris, or even just the interpretation of the debris. There’s a long science fiction literature in which the prospect or reality of alien attack unites the human race — Alan Moore’s “Watchmen” and the movie “Independence Day,” to name a couple. But a more ambiguous contact might lead to more fractious results. “The scenario you outline would be politicized immediately on the international stage; the Russians and Chinese would never believe us and frankly large numbers of Americans would be much more likely to believe that Russia or China was behind it,” Anne-Marie Slaughter, the chief executive of New America and a former director of policy planning at the State Department, told me. And that’s to say nothing of the tensions over who actually owned, and thus could research and profit from, the technologies embedded in the debris.

Slaughter went on to make a point about the difficulty of uniting humanity that I’d been contemplating as well. “After all, we are facing the destruction of the planet as we know it and have inhabited it for millennia over a couple of decades, and that does not even unify Americans, much less people around the globe.” If the real threat of climate change hasn’t unified countries and focused our technological and political efforts behind a common purpose, why should the more uncertain threat of aliens?

And yet, I’d like to believe it could be different. Steven Dick, the former chief historian for NASA, has argued that indirect contact with aliens — a radio signal, for instance — would be more like past scientific revolutions than past civilizational collisions. The correct analogy, he suggests, would be the realization that we share our world with bacteria, or that the Earth orbits the sun, or that life is shaped by natural selection. These upheavals in our understanding of the universe we inhabit changed the course of human science and culture, and perhaps this would, too. “There are times in science when just knowing that a thing is possible motivates an effort to get there,” Jacob Foster, a sociologist at U.C.L.A., told me. The knowledge that there were other space-faring societies might make us more desperate to join them or communicate with them.

There’s a school of thought that says interplanetary ambitions are ridiculous when we have so many terrestrial crises. I disagree. I believe our unsolved problems reflect a lack of unifying goals more than a surfeit of them. America made it to the moon in the same decade it created Medicare and Medicaid and passed the Civil Rights Act, and I don’t believe that to be coincidence.

A more cohesive understanding of ourselves as a species, and our planet as one ecosystem among others, might lead us to take more care with what we already have, and the sentient life we already know. The loveliest sentiment I came across while doing this (admittedly odd) reporting was from Agnes Callard, a philosopher at the University of Chicago. “You also asked how we should react,” she said over email. “I guess my preferred reaction would be for the knowledge that someone was watching to inspire us to be the best examples of intelligent life that we could be.”

I recognize this is a treacly place to end up: evidence of extraterrestrial life, or even surveillance, reminding us of what we should already know. But that doesn’t make it less true. Callard’s words brought to mind one of my favorite science fiction stories, “The Great Silence,” by the writer Ted Chiang (whom I interviewed here, in a conversation that explores this fable). In it, he imagines a parrot talking to the humans managing the Arecibo Observatory in Puerto Rico, for more than 50 years the largest single dish radio telescope on earth. There we are, creating technological marvels to find life in the stars, while we heedlessly drive wild parrots, among so many others species, toward extinction here at home.

“We’re a nonhuman species capable of communicating with them,” the parrot muses. “Aren’t we exactly what humans are looking for?”