In the American state of Indiana, the police observed the appearance of a UFO 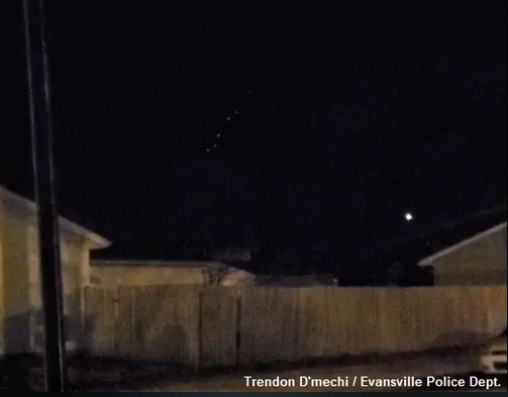 Earlier this week, a pair of police officers from Indiana, a state in the Midwestern United States, spotted a mysterious cluster of lights hovering in the night sky.

The UFO sighting occurred Monday night in the city of Evansville while Officer Trandon Dmetch and his partner were on patrol.

Stopping at an intersection, the patrol noticed a strange series of lights in the sky that appeared to form a line.

Trendan was able to videotape the scene using his mobile phone, and the footage was subsequently handed over to the Evansville Police Department, which informed residents that “our officers may have discovered something from another world tonight.”

In the video, Officer Trandon looks at the strange lights and wonders, “What is this, dude?” His partner can be heard noticing that the lights seem to “stand still” and “there are about ten.”

Trendon exclaims in surprise, “Why are they lined up?”

After that, the police got into a patrol car and quickly made their way to the pier on the Ohio River, which separates Indiana and Kentucky, since it was in that area that this cluster of UFOs was observed, but the UFO disappeared by the time they got there.

Looking back at the incident, the officer said that “my companion and I definitely felt uncomfortable after seeing the lights,” and expressed surprise that no one had reported the strange objects to the police.

The case remains unsolved at this time, and neither the airport nor the nearby air force base had any idea what the officers could see. In addition, the Evansville Police Department said they were equally taken aback by the strange sight.