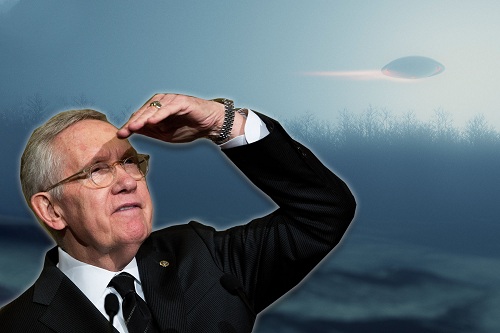 Former Nevada Senator Harry Reid believes that U.S. defense contractor Lockheed Martin may once have had fragments of a crashed UFO in its possession.

Reid, 81, said he tried unsuccessfully to get permission from the Pentagon to search for them.

“I had been told for decades that Lockheed had some of these recovered extraterrestrial materials,” he said.

“And I tried to get secret permission from the Pentagon for me to go look at these materials. They didn’t give that permission.”

His comments were part of an in-depth New Yorker piece about the U.S. government’s investigation of unidentified aerial phenomena (UFOs).

Earlier Friday, The Post reported that a former Pentagon official who claims to have run a UFO research program believes the feds covered up their existence.

Luis “Lue” Elizondo said he was unable to get the Defense Department to take action on what he called a serious threat to national security.

Elizondo, the former head of the Advanced Aerospace Threat Identification Program, spoke out ahead of the release of a sensational government report on UFOs, due to be released by the end of June.

He said the long-awaited report will address what UFO believers have been so eager to learn about the Tic Tac-shaped objects the Navy saw in 2004, the strange “cubes inside spheres” spotted by Navy pilots in 2014, and the mysterious black triangles reported around the world.

Reed – who once took credit for organizing AATIP’s $22 million annual funding – has consistently defended Elizondo, even as the whistleblower has been attacked for encouraging UFO research.

“Mr. Elizondo has spent his career working tirelessly in the shadows on sensitive national security issues, including UFO investigations as head of AATIP,” the former Senate majority leader said in a recent statement. “He has done an excellent job with those responsibilities.”