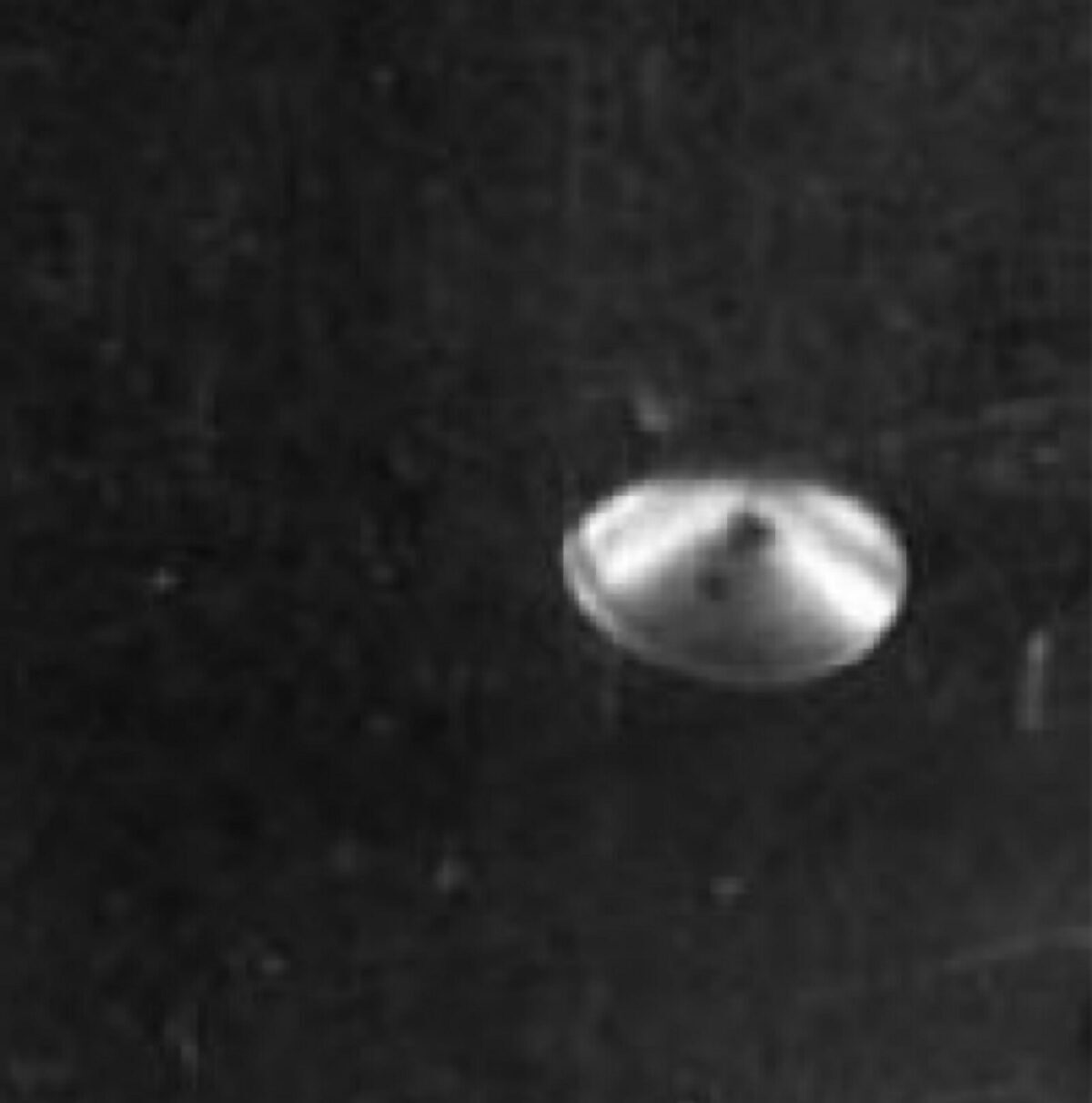 Elon Musk has become famous lately for asking where all the good UFO photos are, and this despite the fact that dozens of UFOs accompany every SpaceX launch, and he can’t help but be aware of it. OK, dear Ilon, here’s one of those photos.

In the fall of 1971 in Costa Rica, the Instituto Geográfico Nacional (IGN) was taking aerial photographs as part of a preliminary study of future hydropower projects. The Costa Rican Institute of Electricity – paid the bill to determine where the water would come from to acquire land for the Arenal Dam project.

So, at 8:25 a.m. on September 4, 1971, experienced pilot Omar Arias flew a twin-engine Canadian Aero-Commander F680 at an altitude of 3 kilometers over Lake Cote (Cote de Lago in Spanish). They were flying in northern Costa Rica, 4 km north of the Arenal area and 40 km south of the Nicaraguan border.

On board were photographer Sergio Loayza, an aerial photographer, geographer Juan Bravo, and topographer Francisco Reyes. Loayza, the photographer, used the R-M-K 15/23 camera, a special 100-kilogram map-making equipment donated by the German government and mounted under the fuselage of the plane. The film used was a black-and-white emulsion at ASA 80, which allowed for high-resolution negatives. A device known as an intervalometer on the camera was set to take one photograph every 20 seconds. The camera was set to focus to infinity and the exposure was triggered automatically.

No one — neither the pilot nor his three crew members — saw anything while they were in the air doing their job. But when Loaiza returned and developed the film in the days that followed, he was in for the surprise of his life. The negatives he had developed were printed on Kodak Safety aerial film, type 3665. Class A.

It’s worth noting that even after the photos were developed, no one immediately noticed anything strange. It was only when looking at the photos in progress that Loaiza enlarged the images and then scrutinized the negative. During this often difficult and boring work, he realized for the first time exactly what they had managed to capture on film.

One of the frames (No. 300) on the film showed what appeared to be a huge metal disk. It was breathtakingly clear because of the film and the quality of the camera. This object was not visible in the previous frame of the film (#299) or in the subsequent frame (#301). 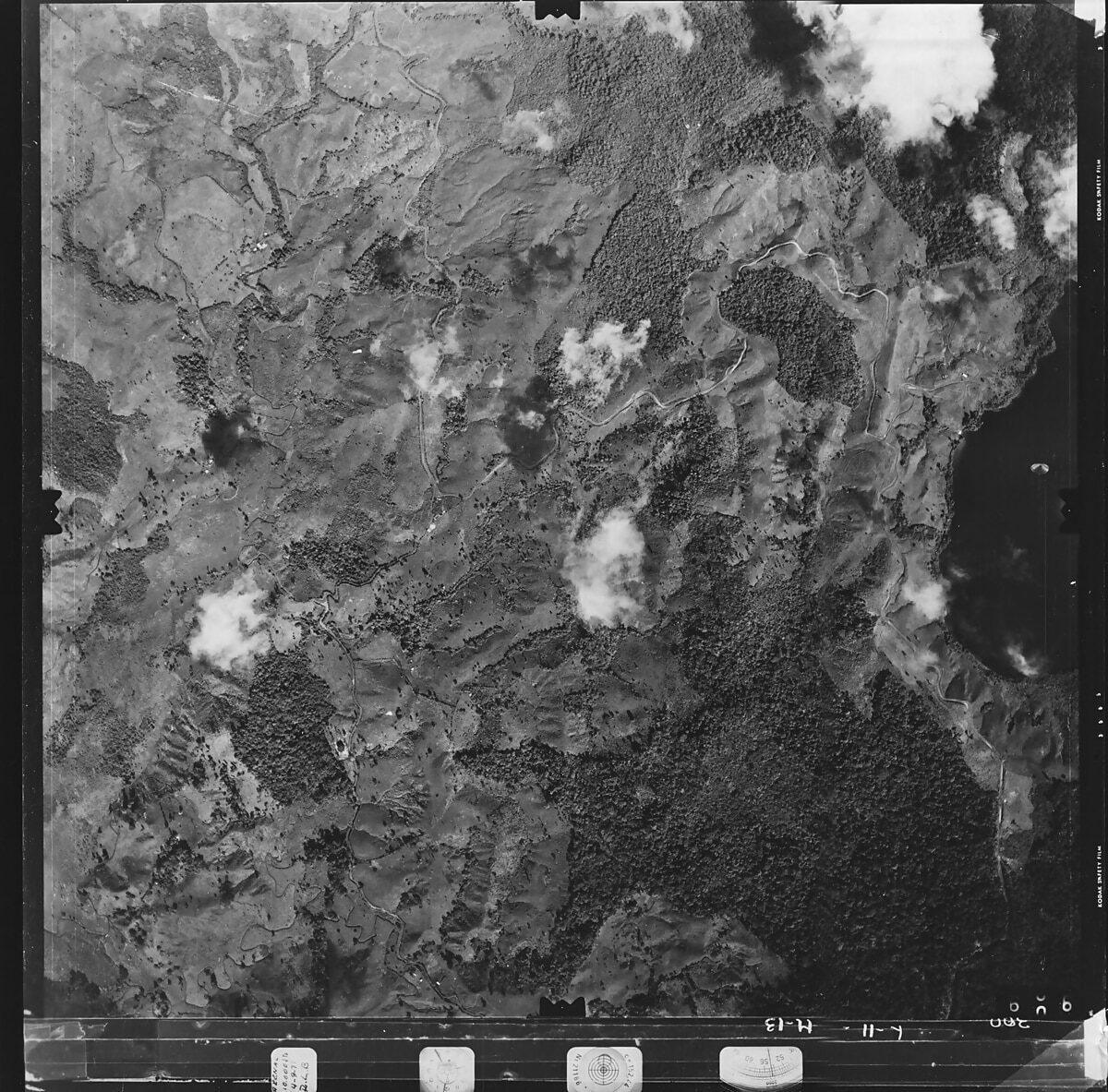 There are several key elements for evaluating this photograph. The image covers an area of about 11 km by 11 km, all in clear focus. Given that the elevation is fixed, one could also get a good guess as to the size of the object. Finally, this object is visible on a homogeneous surface, a black lake background, which contrasts with the disc-shaped object itself.

All that said, this is one heck of a photo. It may be the best photo of a UFO ever taken. It was taken in the ’70s from a government mapping plane in Costa Rica, which had a camera attached to the bottom of the plane. You can clearly see a disc-shaped object in the pictures, and you can clearly see the sun reflecting off this object with a small dot on top, and what is important about this picture is that it was a government photograph. There is a clear chain of custody. It has always been in the possession of the Costa Rican government, so there is no doubt that it is authentic.

Photographer Sergio Loayza, who first discovered the UFO and reported it to his employers, later said that the Costa Rican government immediately classified the photo:

“At the time we were forbidden to talk about it, we couldn’t tell anyone.” 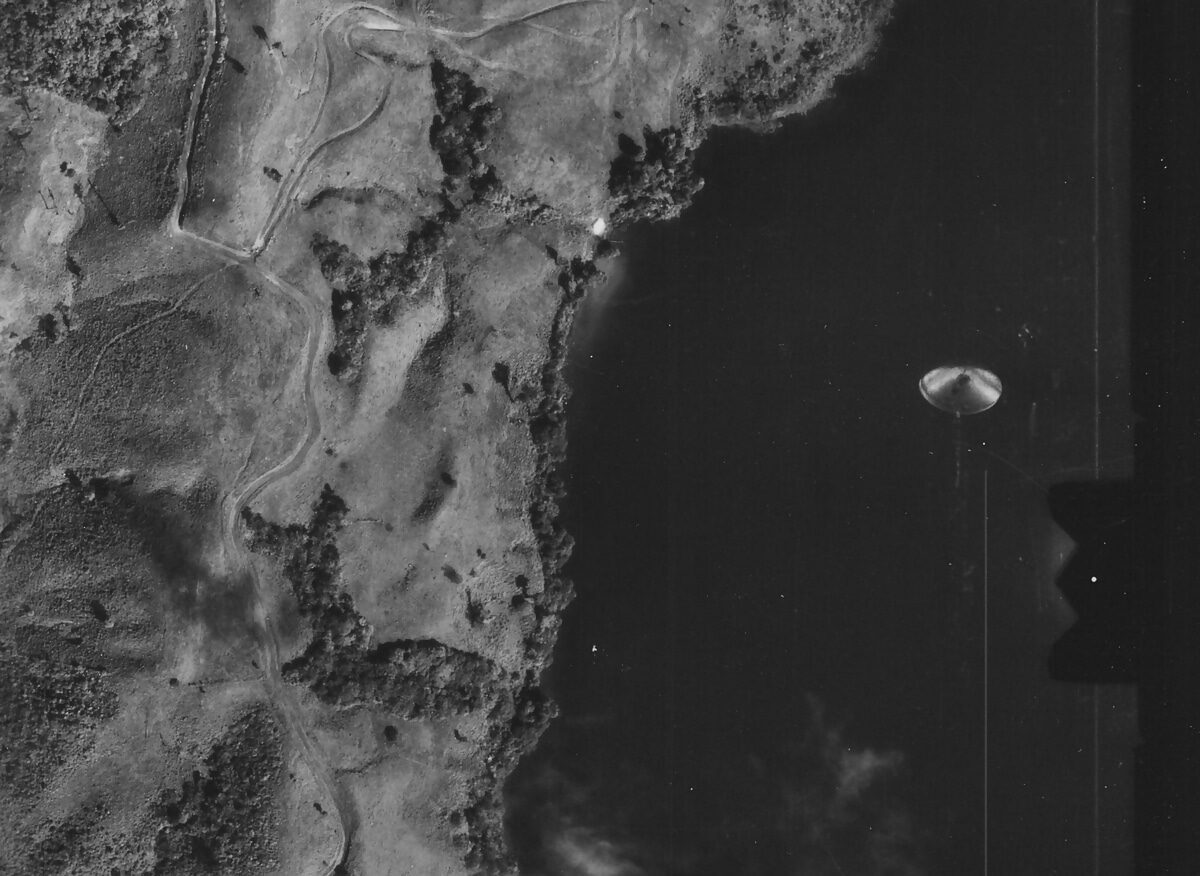 The negative of the tape was not given to Ricardo Vilchez, who ran a civilian UFO research team in San Jose, by photographer Sergio Loayza until 1980.

Loayza always maintained that the equipment used was special, so much so that if a speck of dust got between the lens and the film, the equipment would not work: “There was no room for error. That disk-shaped object is really real.”

After a meeting between Wilches and Loayza, the photo was sent to the Ground Saucer Watch (GSW) group in the United States. The head of the group, William Spalding, carefully checked it and concluded that it was authentic.

In 1985, renowned UFO researcher Dr. Jacques Vallely visited Wilches in Costa Rica, heard the story, and received a copy of the negative. Valli checked it out through contacts in the U.S. government and a California technology company. Neither group had the time or money to devote to analysis, so two years later, in December 1987, Valli took the photograph to Dr. Richard Haynes, a retired aerospace engineer who worked at NASA and whom Valli knew in San Francisco, and Haynes rolled up his sleeves.

The photo was digitized, enlarged and analyzed. Initially, Haynes focused on the illumination. It turned out that the disk image had the shades of lightness/darkness typical of a three-dimensional object illuminated by collimated light, such as sunlight. It looks like a shallow cone with an axis of symmetry and a darker point or region at the top of the cone. Haynes also noted that one side has a sharp focus and the other is diffuse and amorphous. It seemed to him that the darker area might not be a shadow, but the lighter area might be a source of light. 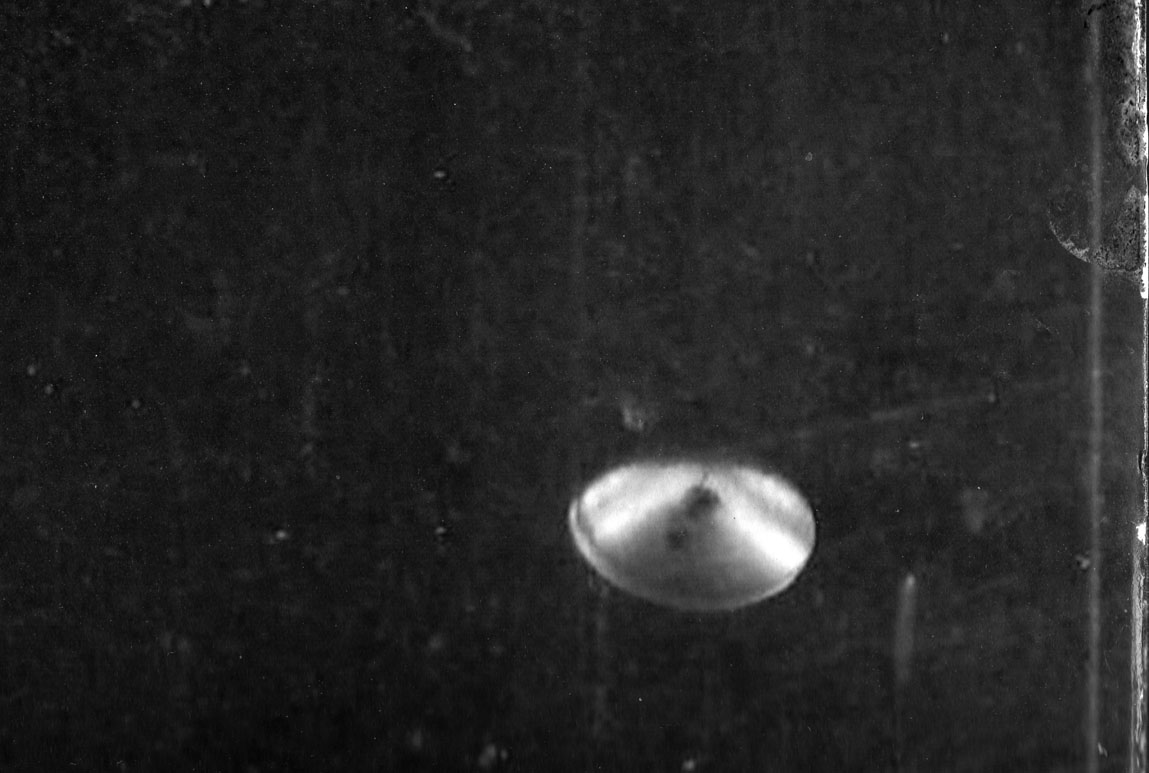 In 1989, Valli and Haynes wrote “A Photographic Analysis of the Air Disc over Costa Rica” for the Journal of Scientific Exploration. The 19-page report contained the following conclusion:

“The photograph is genuine and the object is not the result, of some error. Our analysis showed that an unidentified, opaque, aerial object was captured on film at a maximum distance of 3 km. There is no visible means of lifting or propulsion, and no markings on the surface other than dark areas, which appear to be non-accidental.”

The laboratory in Costa Rica, which first processed the photograph, estimates that the disk is nearly 67 meters in diameter.

The photograph and the negative were also analyzed in France and found to be authentic.

There has always been speculation as to whether the apparatus came out of Lake Cat or was about to enter it. Locals tell many stories of objects coming out of the lake. Since none of the negatives on either side of #300 show a ship or even bubbling water, it is impossible to know. And yet, this giant UFO and it is depicted with specific, clear detail.

This original negative has been preserved by the Costa Rican government and is in that country’s National Archives. There are also copies, such as the one examined by Valli and Haynes.

First, it is a vivid response to Ilon Musk, who has lately become famous for asking where all the good UFO photos are. Dear Ilon, here’s one such picture…

The real answer, however, is that good UFO photos keep getting taken and disappearing. These stories go back to the 1950s and have been frequently reported. Most recently, this happened to the crew of the USS Nimitz when hard drives containing evidence of UFO encounters were confiscated from the ship by people in suits who would not even give their names, but who were obeyed implicitly by senior US Navy officials.

There are probably hundreds, if not thousands, of excellent UFO photos in various government archives around the world. Someday they will finally be published for public use and will see the light of day.

In the meantime, we have this photograph to look at and ponder. This photo clearly captures a UFO and the image is not blurry or indistinct. This flying machine is disc-shaped and has a diameter of 67 meters.

ummmm whats with all the crazy thinking? Isn’t it just the air pressure hole (The bleed hole) on the casing acrylic of the camera mount?