The story of Gabriella Versacci’s alien abduction on October 16, 1973 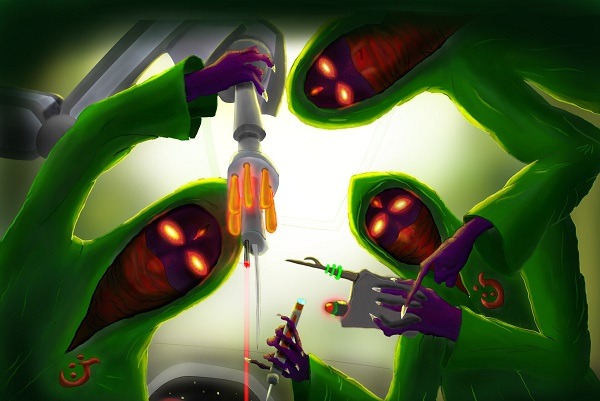 There are hundreds of UFO sightings involving extraterrestrial beings abducting people for medical purposes. Gabriella Versacci claimed to have been abducted by robot-like beings.

It all began on October 16, 1973, when Gabriella Versacci (43) was driving around 2 a.m. on an expressway somewhere near the English village of Langford-Budwill in Somerset, England. She was alone in the car, and the highway was in a rather deserted area. At this time she saw a light coming from a single source that seemed to be stationary.

As she approached the light, it began to increase in size, and suddenly her car began to malfunction. First the headlights went out and then the engine stalled. Somehow she managed to start the car on the side of the road.

It was completely dark, there were no passing cars, and at the sight of the stalled car Gabriella panicked. She went outside, threw her hood on, and stood there in helplessness. Suddenly she heard a humming sound. At first the sound was faint, but then its intensity gradually increased.

Gabriella felt a hand over her shoulder that pushed her to the ground. She struggled to turn to face her attacker and saw a tall, dark-colored metallic figure. She lost consciousness after seeing flickering multi-colored lights.

When she regained consciousness, she said, she found herself standing in a field with robot-like figures next to her. There she saw a bright silver-colored spaceship on the ground. She described it as a ship about 20 feet (7 meters) high and 40 feet (12 meters) wide with oblong windows in the center that had yellow lights coming out of them.

Gabriella realized that the humming sound she had heard earlier was coming from a UFO. Then she lost consciousness again and found herself tied to a table that was in the center of the strange circular room. The woman realized that her clothes had been taken off and a blue blanket had been placed over her instead.

The room was cold. Her hands and feet were tied with rubber bands to the table, and she could feel its cold surface. After a quick look around, she saw a robot that seemed to stand idly by the wall.

Then three humanoid figures entered the room and surrounded her. Two of them stood at the sides of the table, while the third stood near her feet and took objects that looked like cubes in his hands. As soon as he placed them on the equipment panel, they glowed.

Gabriella reckoned that the three figures were the same height, about 170-175 cm. They were slender, fair-skinned, and their clothes looked the same. They wore hats, and their faces were covered with masks of some kind, so that only their eyes were visible. She realized that the men were examining her. During the whole process they were silent, not saying a word to each other, only nodding occasionally. She couldn’t even hear their breathing.

Using a small knife, they took a nail slice from the nail of the index finger of her right hand. A blood sample was taken from her. They then removed the blanket and examined her groin with a pencil-like instrument and an aspirator.

Gabriella kept looking at the inactive robot, which allowed the chief examiner to speak to her in impeccable English. She was told that the robot was programmed to perform certain tasks. The chief examiner had a deep male voice, but strangely enough, neither his eyes nor his mouth moved. When they had finished their work, all three men left the room, leaving her in a blanket that did not provide enough warmth.

One of the aliens returned and walked to the far end of the table. He lifted her blanket from underneath and stared at her body. She felt uncomfortable and trembled, struggling with her bonds. The alien injected some kind of drug into her body and then coitus with her.

After a while, three men approached Gabriella and freed her from her bonds. She lost consciousness a third time, and when she came to, she was standing in a deserted place, dressed in her clothes. Gabriella drove back home.