UFO at great speed collided with the International Space Station 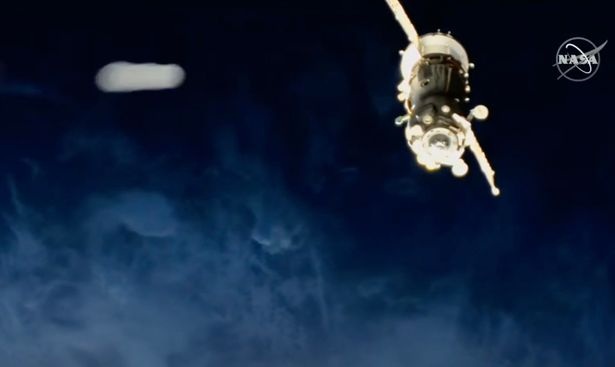 This happened in a live broadcast from the camera installed on board the ISS at the moment when the crew was rearranging the Soyuz spacecraft to move it away from the ISS in order to free the docking station for the spacecraft that was delivering new crew members to the station.

When the Soyuz spacecraft was undocked and taken away from the station, from below on the ground side, a spherical UFO flew very close to it at great speed, which, without slowing down, crashed into the ISS somewhere in the area of ​​the camera installed on board.

The speed of the UFO was tremendous and it is incredible how quickly it soared vertically upward from the surface of the earth. The UFO hit exactly the ISS and judging by the dust particles that appeared from the outer skin, this impact had certain consequences.

The dust indicates that the UFO hit the side of the station, but did not pierce the hull and did not collapse itself. The UFO bounced off the ISS – literally bounced in the same direction as it came, as if its structure was not dense, but flexible.

Then he slowed down and changed the direction of flight, began to fly away in orbit to the side, gradually gaining speed.

If someone wanted proof of the presence of a UFO in Earth’s orbit, then this is what they are. It is simply impossible to explain what happened to anything else.

The incredible speed with which the UFO appeared from below from the earth is simply inaccessible to any of the earth’s vehicles, not to mention the fact that the UFO not only flies at an incredible speed, but collided with the ISS did not collapse, but simply bounced, but then slowed down and changed direction of flight.

All this was done – meaningfully. This object definitely understood what it was doing and this UFO was being controlled by someone. It remains to be understood why the UFO collided with the ISS. Judging by the almost vertical trajectory of its takeoff from the ground and its speed, something made it start in emergency mode and it simply did not have time to choose a trajectory that would exclude collisions with terrestrial objects in orbit.

Apparently, this UFO has happened, some kind of abnormal situation. All this happened on March 19, 2021, and judging by this incident, it can be assumed that such “kamikazes” may be the true cause of damage to the ISS hull and constant oxygen leaks with which the ISS crew is trying (unsuccessfully) to fight.

Although, it can be assumed that such collisions are not an accident, but a deliberate impact on the ISS. Given the huge number of UFOs in Earth’s orbit, which have been observed there recently, it is precisely such collisions (after all, we do not know about everyone and do not know about the consequences) that could become the real reason for the ISS’s practical unsuitability for further operation.