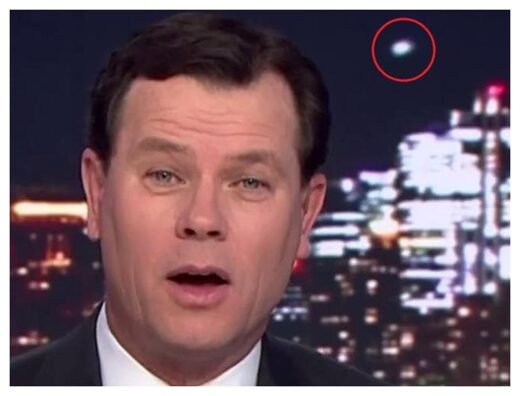 Viewers of Channel 7 in Sydney were stunned last night when a large UFO entered the Earth’s atmosphere during a news broadcast.

Mark Ferguson was broadcasting live at 6:00 pm, when a large, uniformly shining UFO appeared in the background on the background of the Sydney skyline, which slowly descended at a low speed.

Ferguson talked about the incident this morning, telling the hosts of the morning show, “Seconds after switching to the commercial, our cameraman Jess quickly told me, ‘Hey Mark, something just flew behind you. We looked at the tape afterwards and couldn’t believe it; what a shock! ”

Astrophysicist Dr. Brad Tucker of Australian National University told the media that: “It was a meteorite. It was probably between half a meter and 1 meter in size.

It flew all the way down to the New South Wales / Victoria border and there are reports that it exploded near Jindabyne. ”

However, no evidence of a “meteorite explosion over Jindabyne” has appeared.

An astrophysicist can claim that he wants to, or rather, that he is told to assert, but it is enough just to watch the video to see that this object does not correspond to the concept of “meteorite” and rather fits the concept of “UFO”.

"We couldn't believe it!"@7NEWSSydney presenter Mark Ferguson calls in after a mysterious streak of light appeared in the camera behind his bulletin last night.