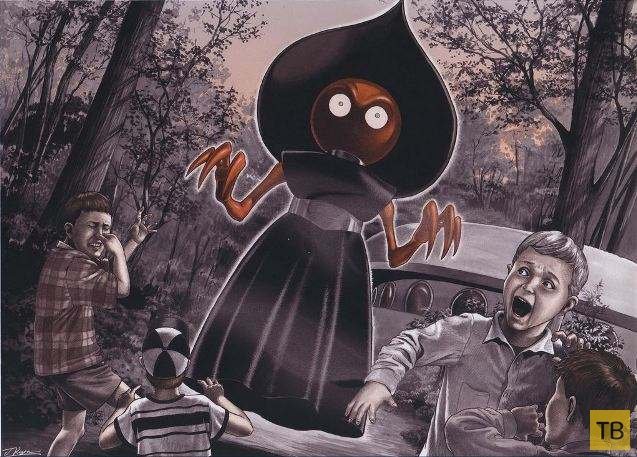 On September 12, 1952, a small group of young boys noticed a blinking, reddish colored sphere float around a hill, hover briefly and then drop behind the crest of another in the small town of Flatwoods, West Virginia (population 300).

From the far side of the hill a bright glow shone, as if from a landed object.

On their way to see what had landed the boys were joined by others that had witnessed the flying spectacle, including beautician Kathleen May, her two sons and their friend Tommy Hyer, seventeen-year-old Eugeen Lemon and his dog.

The dog ran forward of the group and was temporarily out of sight as it ran around the hill. Suddenly it was heard barking furiously and then came running back, fleeing with its tail between its legs, apparently in fear. A foul smelling mist covered the ground making the searchers eyes water. The two leading the group, Lemon and Neil Nunley, got to the top of the hill first and observed a “big ball of fire” fifty feet to their right. Others in the group said it was the size of a house.

To the groups left, on the hilltop just under the branches of a large oak tree, were two small, blue lights. At Mrs. May’s suggestion, Lemon pointed his flashlight in their direction. To everybody’s horror, the flashlight highlighted a grotesque looking creature with a head shaped like the “ace of spades,” as several of the witnesses independently described it.

Inside the head was a circular “window,” dark except for the two lights from which pale blue beams extended straight ahead. In their quick observation of the being, they could see nothing that resembled arms or legs. The creature, which seemed to be over six feet tall, moved towards the witnesses. It seemed to be gliding rather than walking. Seconds later, it changed direction and began heading for the glowing sphere from which it apparently had come from.

All of this took place in the matter of a few moments, during which time Lemon fainted. The others dragged him with them as they ran from the scene. When interviewed about a half an hour later, by A. Lee Stewart Jr., a reporter for the Braxton Democrat, the witnesses were barely able to speak. Some sought first aid. Stewart felt that there was no question that they had seen something that had badly frightened them.

Soon afterwards, after Lemon had recovered, Stewart and Lemon went to the spot where they had seen the creature and the strange craft. Stewart also noted that there was an acrid odor in the air that irritated his nose and throat. He returned alone to the site first thing the next morning. He found “skid marks” going down the hill towards a large area of recently matted grass, which seemed to indicated that a large object had rested there. 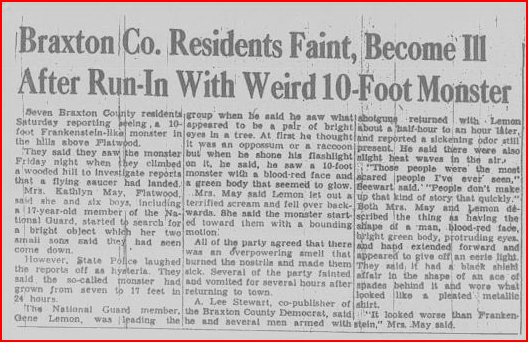 The encounter, which the newspapers quickly dubbed “The Flatwoods Monster” sighting. It took place during a flurry of sightings of unusual flying objects in the region. Bailey Frame, a resident of nearby Birch River, reported seeing a bright orange ball circling over the area where the monster was spotted.

It was visible for around fifteen minutes before veering off towards the airport at Sutton, where the object was also reported. According to an account, one week before the Flatwoods event, a Weston woman and her mother encountered the same or similar creature. The younger woman was so frightened that she needed hospitilization after the event. Both also reported the noxious odor.

Years later, writer John Keel interviewed a couple who claimed that on the evening following the original sighting, and ten to fifteen miles to the southwest of it, they encountered a ten foot tall creature emitting a foul odor. It approached their stalled car then returned to the woods. Moments later, a luminous, pulsating sphere arose from the trees and ascended into the sky.

Many skeptics have claimed that what May and her companions had seen a meteor and an owl, and had mistaken these for the strange things that they reported. Nonetheless, when interviewed shortly after the incident, the witnesses told a story that investigators found strikingly consistent.

When interviewed in the early part of the 1990’s, Kathleen May Horner recalled that two men, first identifying themselves as reporters, then acknowledging they were employees of the government, interviewed her. This is not hard to believe; it is a fact that the U.S. Air Force dispatched two plainclothes investigators to the scene. Like the skeptics, they laid the incident down to hysteria inflamed by an owl and a meteor.