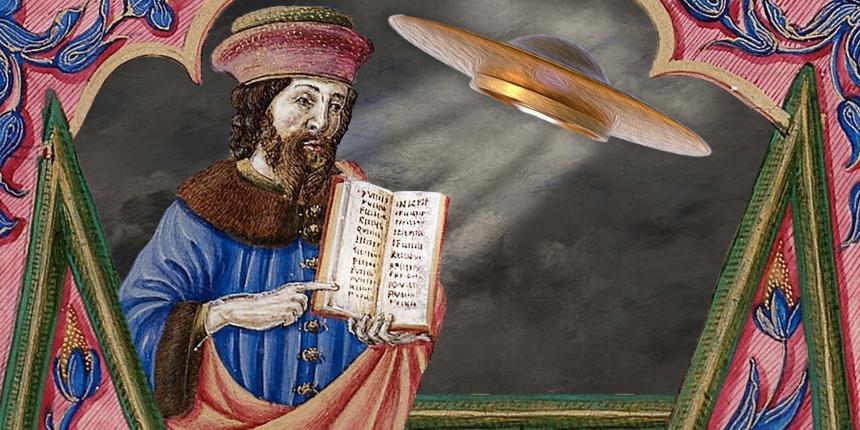 There are many historical documents which describe the appearance of UFOs during classical antiquity (IV century BC – II century AD). Of course, some of these reports can be explained by natural or cosmic phenomena, but not all. there remain confirmed reports which describe the appearance of UFOs and we can conclude that the UFO phenomenon has not changed much over two millennia.

Most reports of flying weapons come from Livy ( Major Roman writer and historian Titus Livy (59 BC – 17 AD) and from the Annals of Maximus, published by the Roman historian Maximus (Valerius Maximus, Marcus, first half of the first century AD, a Roman historian who worked during the reign of Tiberius).

The field of UFO reports is limited to central Italy. The military terminology reflects the most advanced technology, unknown at the time, a trend also found in contemporary UFO reports, in which the witness seeks a familiar technical term to describe the unexplained phenomenon. The fact that many reports were made during wartime may explain the military terminology.

The parmas represented a small round shield,
partly or entirely made of iron, bronze, or other metal. It is therefore logical that observers applied the term to the sparkling, reflective, shiny disc-shaped UFOs they saw in the sky.

The implication seems to be that the flying object was stone-gray in color.

Sporadic reports of such objects continue to appear after this in the lists of Roman historians. Direct sources again are Livy, Pliny, Plutarch, Obscience, and Orosius:

“Comps had weapons (arma) flying in the sky” (Obsequens 17).

“the inhabitants of Ameria and Tuder observed weapons in the sky carried together from the east and west, and those from the west were crushed.”

“in Rome ‘a round shield (clypeus), burning and emitting sparks, ran across the sky from west to east at sunset.'”(Pliny)

Clypeus was a round shield, similar to a “parma” but larger.

“In Rome ‘the spectacle of defensive and offensive weapons (types of telorum armorum) was seen rising from the ground into the sky with a rumbling sound.’

The most famous “heavenly army” appeared in the spring of ’65 over Judea. The historian Josephus Flavius reports:

“In the month of Artemisias a miraculous phenomenon occurred. Before sunset chariots in the air and armed phalanxes were seen in all parts of the country, rushing through the clouds and capturing cities.”

Josephus Flavius probably observed the phenomenon himself and researched it, as he turns to eyewitness accounts to confirm what he saw. This phenomenon is indeed reminiscent of the “aerial battles” of modern UFOs.

The first group of reports of fireballs comes from the Second Punic War.

“At Capenus two moons rose at that daytime. Then one moon fell and there was a great downpour” Livy and Orosius.

The three moons appeared simultaneously in 223 BC and in 122 BC are reported in the writings of Livy, Orosius, Apuleius, and Zonar.

“The fire-spewing orb was the size of the moon.”

A more complex object appeared sometime between 151 and 146 B.C.

“flashed in the sky a fire as big as the sun. At first it was a fiery red disk, emitting a light so bright that it dispelled the night. Then, little by little, its size diminished and its brightness faded; at last the light went out completely,” Pliny

In the same year, a much stranger object was seen near Spoletia:

“The Romans saw a golden-colored ball, which then became like a spear, and it fell down from the sky to the earth; after it became larger, it was seen to rise up again, and from below the earth was rising behind it,” Orosius

Pliny also reports an incident which at first sight
similar to the previous one, but occurred at night:

“A spark was seen falling from a star and growing as it approached the earth; after it became as large as the moon, the light scattered around as in an overcast day; then, retreating to the sky, the object turned into a torch. It is recorded that this happened only once: Proconsul Silanus and his retinue saw it in the consulate of Gnaeus Octavius and Gaius Scribonius.”

M. Junius Silanus was governor of the province of Asia in 76 B.C., and the incident probably occurred there. Silanus’ testimony receives indirect support from Lydus for several later occurrences of the same phenomenon, though without reference to the torch.

Only four centuries later the following account appears in this category:

“At Antioch in the afternoon a star was seen in the eastern part of the sky, emitting abundant smoke, as from a furnace, from the third to the fifth hour.”

This occurred c. 334, and was recorded by the Byzantine chronicler Theophanes.

“A column of fire appeared near Athens in 404 B.C. on a moonless, inclement night,” writes Julius.

In 74 B.C., when the Roman army under L. Licinius Lucullus was about to engage the troops of the Pontic king Mithridates VI. According to Plutarch:

“But soon … with no apparent change in the weather, but suddenly the sky was torn apart, and a huge, flame-like body was seen falling between
the two armies. It looked most like a wine jug (pithoi) in shape, but in color it resembled molten silver. Both sides were amazed at the sight and separated. This miracle took place in Phrygia, at a place called Otria.”

The presence of thousands of witnesses, including Lucullus and Mithridates, confirms this incident. The term pythos was commonly applied by ancient meteorologists to any large barrel-shaped smoky celestial fire, according to Posidonius.

In modern experience, such an episode would easily fall into the category of a classic close encounter with a UFO.

A fourth incident is known from the biography of Saint Anthony, written by Athanasius, Bishop of Alexandria, after a personal conversation with the witness some years later. The date was 285, at or near Fayyum in the Egyptian desert.

“a great silver disc appeared on the sands of the desert, which suddenly disappeared like smoke.”

Close contacts of the second kind

There is no record in ancient literature of a UFO-like object pressing an imprint into the ground or leaving material remains. On the other hand, rains of strange material have been reported from time to time, and similar reports have since appeared in modern UFO research.

Contemporary reports say that a whitish, thin substance called “angel hair” has on rare occasions fallen out of UFOs, and sometimes quickly disappeared upon contact with the ground. In other reports, the glassy fibers are left behind by the UFO after taking off from the ground, or the chalky substance remains.

An ancient specimen of “angel hair” may have been picked up in Rome in 196 by historian Cassius Dio, who writes::

“A fine rain, resembling silver, descended from the clear sky on the Forum
Augusta. True, I did not see it when it fell, but I noticed it after it had fallen, and with its help I covered several bronze coins with silver; they retained the same appearance for three days, but by the fourth day all
substance rubbed into them disappeared.”

Other instances in which a solid whitish substance was involved include two “chalk rains,” one at Cales in 214 B.C. and another at Rome in 98 B.C.

Close contacts of the third kind

Occurrences of UFO-related beings, usually described as human or humanoid, have been observed.

“at Hadria an altar was seen in the sky ; around it were figures of men dressed in shining white.”

The nature of the altar (ara) is not specified. But four years earlier:

“in the county of Amiternum in many places were seen in the sky figures of men dressed in shining white; they approached no one.”

This last encounter is again taken from early Christian hagiographic
and took place not far from the Via Campana between Rome and
Capua in 150.

“On a sunny day, a ‘beast’ resembling a piece of jug about 30 meters in size, multicolored from above and emitting fiery rays, landed in a cloud of dust accompanied by a ‘girl’ dressed in white,” from the writings of Ona-Mas, brother of Pope Pius.

To summarize all references to UFOs in antiquity, the:

– texture-metallic or sometimes glowing or cloudy;

– type of motion-floating, disorderly or smooth flight, with rapid
disappearance.

In at least one case, the presence of “occupants” dressed in shiny white clothing is reported. Encounters range from distant species to
possible actual contact; the preferred location and time of observation , are rural areas during daylight hours.