Who sent titanium spheres with a mysterious black liquid to Earth from Space? 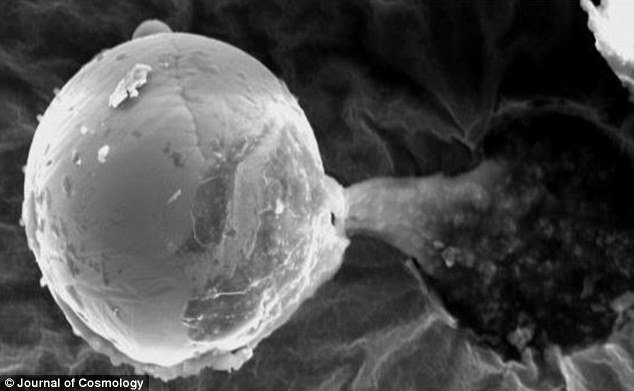 To begin with, it is worth recalling that there are studies by scientists who say that the coronavirus, which is now tormenting humanity, came from space. And this is not an ordinary virus, it changes the gene code of humanity and no one knows what the consequences will be.

This mysterious virus, according to scientists, “slept for many years before being activated,” but when did it first hit our planet? Maybe the answer to this question lies in the events that happened not so long ago in 2015?

In January 2015, a joint team of scientists from Buckingham University and the University of Sheffield discovered a tiny but very interesting object. Scientists sent the balloon up to 27 kilometers to collect samples of dust and other particles. And they found something interesting.

A tiny metal sphere, the thickness of a human hair, collided with the surface of a sample collector attached to the ball, leaving a small indentation. This suggests that the sphere was moving at great speed.

As Professor Wainwright explained, “The sphere trapped in the stratospheric sampler made a small crater, a small version of a large crater that hit the Earth and killed the dinosaurs.

This impact crater confirms that the sphere came to Earth from space. An object from Earth cannot move at that speed, falling back to the ground. ”

X-ray analysis of the sphere showed that it was made of titanium with traces of vanadium.

Titanium is one of the hardest metals known to man and has a fairly high melting point. This led Wainwright and his team to conclude that the sphere could well have been manufactured and unearthly in origin. Further, it is even more mysterious …

The surface of the sphere was covered with a “matte layer like mycelium” and a black biological fluid “oozed from the center.” Organic ingredients surprised scientists.

Despite the “generally accepted and only true line of science” struggles with theories that speak in favor of life brought by meteorites, analyzes and samples of bacteria from the upper layers of the stratosphere, as well as studies of extremophiles, suggest otherwise.

Proof that the Earth is in constant exchange with space will have implications not only for our understanding of the origin of life, but also for alien viruses that may be important for our development and even survival.

Wainwright suspects this sphere may be evidence of direct panspermia or even the deliberate spread of life in the universe.

Francis Crick, the Nobel laureate for his contribution to the discovery of the structure of the DNA molecule, shared the same views.

Humanity itself can create new life with a single capsule sent to the right place at the right time. Even if it is now fantastic, there is nothing difficult in the idea of ​​sending a caravan of microbes under a solar sail. Perhaps we have already unconsciously sent extremophiles to Mars. They may have already established their colonies – we can only guess.

Was it sent by a sufficiently advanced civilization more than three and a half billion years ago, when our planet was young and sterile?

How can I find the answer to this question? Since the early 1980s, some have speculated that the deliberate seeding of life could be proven if the genetic code of the first microorganisms on Earth contained “distinctive signature messages” as the hallmark of early engineers.

In 2013, a group of physicists found indirect confirmation of this. It turns out that the alien code is hidden in our genetics?

According to two scientists from Kazakhstan, Vladimir Cherbak and Maxim Makukov, this is so. They believe that our genetic code contains an extraterrestrial signal encoded billions of years ago by technologically advanced aliens.

It’s no secret that DNA is a pretty powerful way of storing information. Scientists were looking for a code enclosed in human DNA that could not be explained by Darwinian evolution, and called it “the biological search for extraterrestrial life.”

Remarkably, the human genome partly supports their theory. Kazakh scientists have come to the conclusion that the DNA they determine can be up to ten billion years old. But the age of the Earth does not exceed 4.5 billion years.

If we assume that in 2015, scientists accidentally recorded the “seeding” of the Earth with an alien virus, which, having entered the habitable environment on the planet occupied by us – people, and began to change our gene code, then the question arises – who sent these spheres to us from the depths of space, and the main thing – what is the goal of these mysterious extraterrestrial civilizations pursuing?