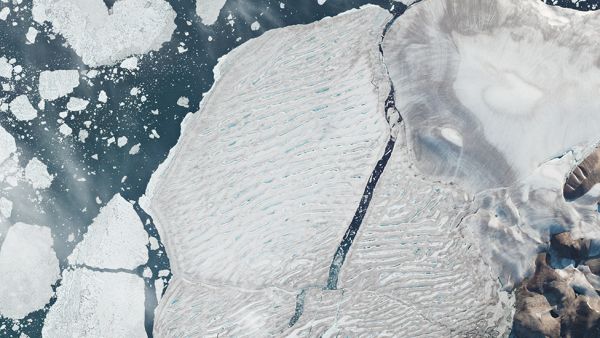 Climatologists have found that the Greenland glacier, Zacharia Istrem, split into pieces unusually quickly and sharply decreased in size at the beginning of the 21st century, long before the destruction of its neighbors. The fact is that warm sea water has penetrated into its foot. An article with the research results was published in the scientific journal Proceedings of the National Academy of Sciences.

Greenland’s glaciers have been melting rapidly for many years. On average, this process has accelerated by about four times since the beginning of the century. Because of this, in August last year, a huge part of the island’s ice massif weighing 12.5 billion tons broke off and floated out to sea. In 2019, the total mass of Greenland ice fell by a record 532 billion tons. Scientists led by Professor Shfakat Khan of the Danish Technological University have found out why the glaciers of the island are melting so quickly, using the example of one of them – Zachariya Istrem.

This glacier and its “neighbor” 79N, which split into many pieces in September this year, account for about 12% of Greenland ice. Unlike 79N, Zachariah Iström began to deteriorate rapidly in the middle of the last decade. In recent years, its area has been shrinking more and more rapidly.

The researchers studied the structure of the Atlantic Ocean floor in the area of ​​these glaciers, the direction of currents in this area, as well as data from gravimetric satellites and oceanographic aircraft. It turned out that the water in the vicinity of both glaciers moved differently, despite the fact that both Zachariya Istrem and 79N washes the East Greenland Current. The average water temperature in it is about 1.25 ° C. By the standards of the world’s oceans, this is a low temperature, but since the glaciers are even colder, even this kind of water can accelerate their melting.

Previously, climatologists believed that this relatively warm water did not reach the foothills of both glaciers, as it moves at a relatively great depth, where it is impeded by deposits of sand and silt. However, Khan and his colleagues found that this was not the case with Zechariah Istr. The fact is that under this glacier there was a trench 800 meters deep. It passed almost the entire area of ​​the former marine part of the massif.

Similar processes can occur in other regions of Greenland. This may explain why the island’s glaciers are melting much faster than climate models predict. Khan and his colleagues hope that further study of the structure of the seabed off the coast of the island will allow us to assess the extent of the effect of water on the largest glaciers of the island and to clarify the contribution of this process to the melting of the entire ice cap of Greenland.